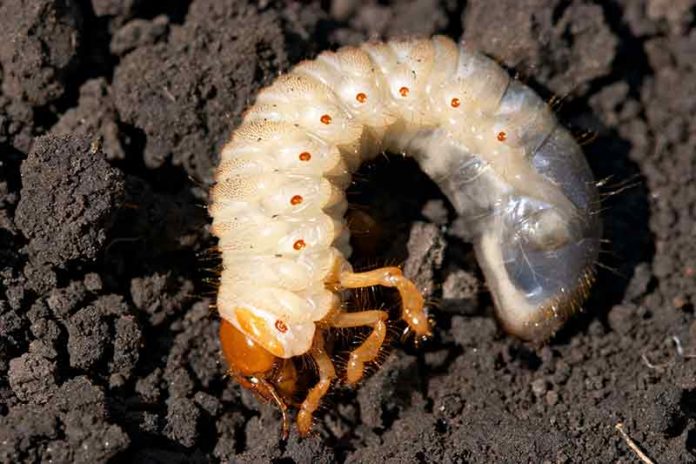 The world has a natural habitat for many living things, and it is structured in a way that one depends on the other for survival. Grub worms are one of the common pests found on a lawn. Although one or two in a lawn cannot be damaged, immediately the number is increasing at an alarming rate, a natural way to control them should be sought. This article will talk about all the important facts and natural controlling ways for grub worms.

What are grub worms?

The growth of many insects requires passing through many life stages before it becomes an adult insect. Although many see grubs as worms, however, it is not so entirely. Grub worms are one of the life stages for a scarab family beetle. At this stage, the set-to-mature beetle develops into a C-shaped worm with an orange head and shiny body. Grub worms are also referred to as grubs, white grubs, lawn grubs, or turf grubs.  Grub worms specialize in eating root grasses on the lawn. These tend well in areas with numerous species of grasses. However, they thrive well with consuming grasses in an area with a single species. Their most damage is evident during the fall and spring seasons; during this period, they enjoy eating from the topsoil. Looking at grub worms from another side, they are beneficial to the ground as they provide natural fertilizer to enrich the soil.

Causes and How to Detect Grub Worms

There is no particular cause attributed to the growth and spread of grub worms in a yard because they are natural organisms that will eventually develop into adult beetles. However, it is important to note the changes in the grasses in the lawn, especially during the spring and fall seasons. This will help the homeowner determine the questioning growth of the grub worms.

Another step for easy detection of grubs is the increased presence of birds, raccoons, or wasps. As explained in the introduction, the natural habitat revolves, and organisms depend on each other to complete the cycle. The birds, raccoons, and wasps are insect-eating animals; hence, they tend to dig into the ground for earthworms and other insects. But, another reason for their increased presence in a house may be for grub worms.

To be further convinced about the worms, an inspection method can be employed. The use of common tools in the home, such as spade, will come in handy when the soil’s inspection is done. During the survey, an amount of 5 grub worms per soil sample shouldn’t raise the alarm.

Grub worm treatment can be done using artificial or organic methods. Before administering treatment for the grubs, it is important to reiterate that treatments are less likely to work during the spring season. However, for fall treatment, products like Dylox are the best to notice changes immediately. To treat naturally using organic materials, please refer to the materials below:

Neem Oil: Neem oil is a multi-purpose oil that serves various purposes. Neem oil is produced from the neem tree and contains effective properties for insecticides. This oil works as a natural control for grub worms. To use this, mix with water and spray on the damaged areas in the lawn. Thereafter, watch the magic that follows.

Spores: spores are another natural way to control the infestation of grub worms. Besides this, introducing spores into the lawn area will release effective microbes to control, kill and decompose the grub worms and further prevent the organism’s increased presence.

Nature has given the natural habitat the necessary things to enhance the growth and development of each organism. For grub worms, they are essential in the environment. However, it is important to notice the excessive presence of the organism. Serious consideration for the tips on grub worms’ treatment will help control their presence on the lawn.

Working in Bed? Here’s How to Boost Your Productivity

How Vinyl Flooring In Would Change Look Of The Home All...

How do you know if you need a plumber?